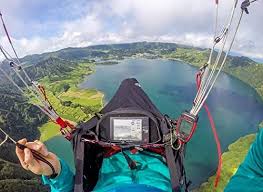 Opening the box you are met with probably the largest devices on the market in terms of screen size. The build quality of the device is overall very professional, the device feels solid to the touch while not being overly heavy. The front panel is slightly flexible and i would have prefered to have a more rigid plastic used as this may limit the amount of protection that is available to the screen during packing or potential knocks and bumps.

When activating the device it takes about 30 seconds for the full startup procedure which is comparable with most devices on the market at the moment.

Over all the UI is Easy to understand and navigate if you're not coming from a different device. The latest fw update has improved the GPS fix times that is now comparable to that of other devices on the market.

Changing things on the device can be a bit of an annoyance as some things you need to do through the cumbersome online screen configurator and some things are don't via the SYS pc/mac app. Some elements like the 3d augmented view and transition assistant are unchangeable which is a little bit of a letdown. Due to the processor speed and the delay in the e-ink display, entering any values into the device is fairly time consuming. I was able to insert a simple task into both my flymaster and c-pilot in the same time it took to enter into the SYS Evo, once you get used to the delay it does go much smoother but initially, it was slightly frustrating. 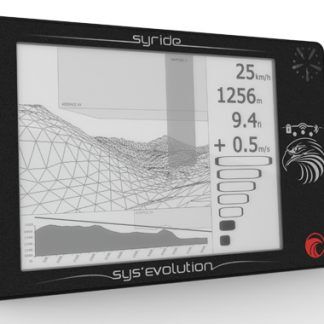 As far as E-Ink displays go, it has the same performance, visibility and drawbacks both actual and potential.

On the pro sides, the visibility in any direction of sunlight is difficult to beat by any device on the market apart from others using e-ink displays, the display saves a fair amount of weight for the whole unit.

The screen is glove friendly so no matter how fat they are they will work.

The drawbacks of the e-ink are it's slow refresh rate 1/sec, and the ghosting which are both fairly noticeable during thermalling, the ghosting increases slightly with a drop in temperatures.

Airspace visibility is (at the moment) second to none, you can configure to be able to see a 2d map birds eye view, side view and a 3d flight view all on the same screen. For those pilots that need to navigate through a lot of airspace during their XC flights this instrument is your best bet in terms of airspace management and avoidance (UK pilots in particular).

If only it would be possible to have different colours for different airspace zones.

The only drawback is that you can't make the 3d airspace view full screen. (this may change with later firmware versions but might be limited due to the processor).

The overall usability and look of the Topo map is very good with roads, terrain, water, cities all being clearly visible. I was slightly disappointed that as you zoom in the detail becomes rather pixelated. In reality, you would probably never need to zoom in to that level while flying anyway but I felt it needed a mention. 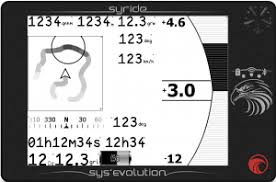 In terms of route optimization currently there are minimal differences between the devices on the market, + or - 100m or so on a set task and the routing optimization worked as expected.

The track trail function works as expected changing colour depending on the strength of the lift/sink and makes it easy to find the lift you have been through. The only drawback that i noticed is the thermal core indicator was having issues in stronger wind (>20km/h) where the algorithm that the Evo uses didn't follow the core as well as other devices on the market and the core indicator would take some time to update (i had already drifted approximately 100m away from where it said it should be), i'm sure this will be improved on in coming firmware updates. 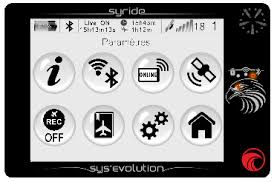 Out of the box the only thing that i changed was the volume, the default settings feel really nice. The vario is fast reacting, and the default tone is relatively relaxed without making the pilot feel nervous. The vario tone is fully customisable so you can set it how you like it.

After spending about 4 hrs flying the battery had dropped approximately 15-20% flying in 10 degrees. So you could probably get away with doing a full week comp on 1 charge.

For those that are looking for something that has great visibility in all conditions, readable detailed maps for XC or Comp flying and very good airspace visualization then this is probably the unit for you.

Needless to say if you'd like one of these or any other Gps we can help, check out our shop here