After just over a year of planning, discussions, a trip to the US for winch trials and a trip to Argentina for some tow training, and many of our rare free days on our home water, we were ready to open our doors to our first Pilotage Control Course or what everyone else liked to call "SIV" course.

Planning for what you need

For a long time at FlySpain both Rob and I have noticed that the pilots we get through pick up thermalling very quickly but what always puts them off is the air that thermic flying can generate. Instead of gritting the teeth and biting into the thermal they tend to hang around the outside where the air is actually more disturbed and spend a lot of time worrying about the bumps and bangs you get from the wing as it travels through the air. Magazines boast Xc weeks galore, we read of epic xc routes around the world but there has always been a knowledge and skills gap between beginner and half-competent pilot which we´ve endeavoured to bridge on our own holidays. We have always wanted to safely educate pil 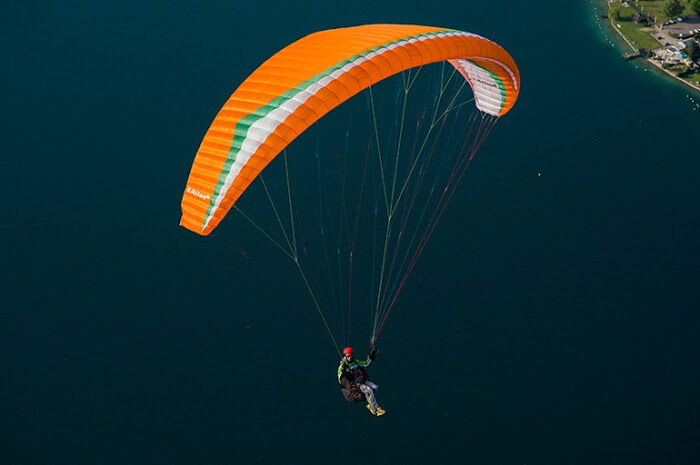 ots beyond that of club pilot soaring and take it to the next level, combining the thermalling that we do here with the education of manoeuvres and how to deal with the glider in turbulent or thermic air which you are bound to experience wherever you live so we have introduced our new 'Pilotage and SIV' courses to fill this gap.

Great experience to draw on

I have had 5 years of Acro training, travelling to many parts of the world to practice every type of situation and have had my fair share of experiences that has given me the knowledge base to prevent the next generation of pilot having to learn the hard way. Combine this with the XC brain of Rob who only the week before had taken Rick, awaiting the Control Course, on an XC flight of over 60k only landing due to the over powering edge to pee. Rob is well established as an XC flyer having completed regular 70k + flights in Spain with a wealth of free flying from Colombia, Mexico, South Africa and plenty more on the mantlepiece.

This gave us the opportunity to combine our experience and really tailor a course to exactly what we thought the problems and fears were that were holding back many a budding pilot. I really tried to stay away from the tag of SIV course as I feel over the years the word has built up a stigma and is associated with bungled stalls and failed spins, when what they are really about is glider control and understanding, teaching the pilot not to overreact which is the cause of most big incidents in thermal flying or manoeuvres that have gone bad. We wanted this course to educate and reassure pilots of all abilities that much work has gone in to make the gliders with a huge amount of passive safety relying on a calm and controlled pilot to lead the way.

We had decided to make the courses on our home turf where we know the weather inside out and can make best use of any conditions. Towing over a lake like Bornos in Spain meant relatively inexpensive fares and freshwater to practise over in case anyone got a dipping. Bornos is  a beautiful lake set in the foreground of the Sierra de Grazalema Mountain range. It was a new experience for all of us but proved to be a very simple process providing a few crucial parts were managed properly during take-off and initial flight. We spent a lot of time training on each other both in Spain and over in the US and Argentina preparing ourselves for all eventualities.

It was lovely to meet the group who were mostly pilots with 20-60 hrs whom we knew from EP-CP through to now or we had gotten to know over the weeks before on our thermalling course where some of the lads got themselves settled in to flying and their gliders achieving some fantastic XC flights along the way.

What was interesting was the reaction of the group when talking about the maneuvers compared to the towing. Most of the guys were more worried about not having towed before than what i was going to ask them to do with their gliders.

Our first day of the course was designed to dispel any fears of towing by heading down to our local air field and making a series of practice tows across the grass. This gave the guys a chance to get a feel of the process and the tension through the line they can expect on launch and in the air.  After a few rounds of that the guys were happy and the focus and fear was now well and truly back on the next days manoeuvres. We left the airfield and headed to El Bosque where the guys got to have a lovely evening boat around landing in the Sunset.

The next day was an early rise as although the Tow briefings had all been done on the Sunday we still had the maneuvers and safety briefings to do and the boat and winch brought over. After much early excitement we got rudely interrupted by a light and variable wind preventing us from gaining much height as proved by Rob making a demo flight.

We were glad of the Easy-Up's shade and much time was spent either in the Lake or out on the Kayak cooling off while we waited for the wind. It did come on as the forecast predicted and we were off. The advantage of the Lake is that we have an array of launch sites giving us a big window for wind direction. A small cruise across the lake with the first 3 and we were ready for business. Once going we rattled through the flights and got stuck into Big Big Ears. The altitude was good getting 2500ft from most Tows allowing plenty of time for manoeuvre repetition which is so important for the pilots as it gives time to really settle into the manoeuvre repeating it 3,4 or 5 times during the flight. With the great altitude, it also gave us time to get started on some Asymmetric deflations.

It was interesting to see how after completing the Tow up it gave the guys a lot of confidence and they all got stuck into each maneuver with 100% effort. There were no real surprising results from the first round of Deflations with all the gliders reacting as expected if not even better with some hardly turning off course at all. For the next day the wind again came on perfectly during the afternoon and we were off and running again making 14 tows in around 3 plus hours. We had spiced up the maneuvers this time making deflations whilst at full speed. It was great again to see the guys get stuck in and give it their all. All the gliders behaved as expected and even the Rush 3 & Sprint  Evo that are very high performing top end EN B gliders, although looking aggressive at the entry to deflations reacted very well.

It was very satisfying to sit in the boat and watch what were former EP-CP students now getting stuck into maneuvers and dealing with them perfectly. It was a great feeling for us to finally be able to offer the missing piece of our jigsaw and bring these guys forward as better more educated pilots.

The next few days saw great wind conditions and we could make one after the other Tows getting always around 2000ft-3000ft. After the deflations came the B-Line stall which surprised a few at the pressure required to initiate the maneuver. Also in this section is entry and exit to Spirals. All too often I see pilots making good deep strong spirals but totally miss managing the exits resulting in big surges and deflations. We spent a long time working on a good smooth entry and most importantly a good controlled exit. For most this was the first time they had really built up the speed energy you get from a spiral, so the adrenaline was flowing nicely.

For some of the more experienced pilots the request was full stalls and Alan was first up with the Rush 3. We again had great altitude which allowed us to make 4 full stalls with the glider behaving as you would expect from a glider in its class. Alan showed great pilot skill, controlling the glider very well throughout the sequence of stalls.

It was no surprise upon returning to the shore that there were now nearly half the group queuing up for full stalls. The last day we made a bonus day and pilots could choose what maneuvers they would like to do. For some we worked on deeper spirals and exit management and for the rest we headed up for the full stalls or search for Spin.

Top results by the end of the week - huge progression

I was amazed at the confidence that had built up in the pilots during the week. On Monday morning I'm sure not one of the group would have given any chance of making deep spirals or even contemplate the thought of full stalls. Now we couldn't hold them back. Thats the point that we knew we had done our job and achieved our goal. The point at which the pilot is confident in their ability and their glider and has the knowledge to recognize and deal with any situation in flight. It was a very proud moment for us.  The last maneuvers went very well with Ian showing great composure falling back on skills learnt the previous days to control his glider after a cravat on the exit from a stall.

Alan rocked his last flight choosing search for spin and to have ago at the SAT. The search for spins went all as planned and I couldn't wait to get down to the SAT a favourite maneuver of mine. The altitude was great again achieving 2500ft + from the Tow. The entry to the SAT was perfect and there were cheers from the boat as if Alan had just scored the winning goal as he SAT'ed down beautifully to end a fantastic week and round off our first Pilotage Control Course.

A special thank-you to all the boys who supported us Phil, Little Joe, Shauny, David, Rick, Michael, Ian, and Alan. Also a very thank-you to Rob and Captain Jack for all the long hard work behind the scenes.

Captain Jack was flawless in the boat always having us in the perfect position sorting out the line and taking care of the fuel the winch and anything else technical which I ran a mile from.

Its great to see the Pilotage course booking up already. If you've been contemplating doing a Control or SIV course don't put it off any longer come and unleash the real pilot in you and get to really know your glider. Check out all the pics and stories on the FlySpain Facebook page For a full list of dates, availabilty and to book simply go to our online Calender. For any queries just make your Enquiries here.

We look forward to seeing you soon.